Curious about how carsharing might fit into your families lifestyle? Wondering how you can live car free in Winnipeg and still get the kiddos to school in the morning?

This Q&A series highlights the experiences of members that carshare as a family. We get a lot of questions about how carsharing works in general, but these folks get full-on stopped in the streets with questions like, “how do you manage the car seats?” and “what’s the deal with your car?”

Today we are chatting with Karen and Jason, who have two little ones. They have been with us since 2013 and live within the Osborne area, which is host to 7 of our cars.  They were already experienced carsharing members when they started their family and today they are going to share some stories about that transition. – To start, give us an idea of your carsharing story. Have you ever owned a car?

J: I used to have a truck, but drove it through the ice of Lake Manitoba…

I was driving across the lake at night near Steep Rock and suddenly the white ice went dark. I just couldn’t stop in time. I slid right into the lake. I was able to roll down the window and get out by climbing onto the roof of the truck and jumping off the back onto the ice… As I was running home across the frozen lake I realized… my skates were in the trunk, I should have grabbed them and just skated home!  *queue Canada Heritage Minutes voice-over* Why did you choose to join Peg City Car Co-op? Did you find the transition to carsharing easy?

J: I think it was 2013 when we joined. Karen had a car that we used together, but it was at the end of its life, so instead of replacing it, we decided to go without a car all together. At the time I was in school at U of M, and now I work at the University, so public transportation was the perfect thing to get there. The real questions was, “how does Karen get to work?”

K: I was working at Woodanchor!  I would carpool with my colleague Kellen in winter, and in summer I would bus to the university where I had stashed a bike. I would just hop off the bus and bike the rest of the way down Kings Drive from there. It worked perfectly, and such a good way to start the day and end the day. And it was a beautiful bike ride. 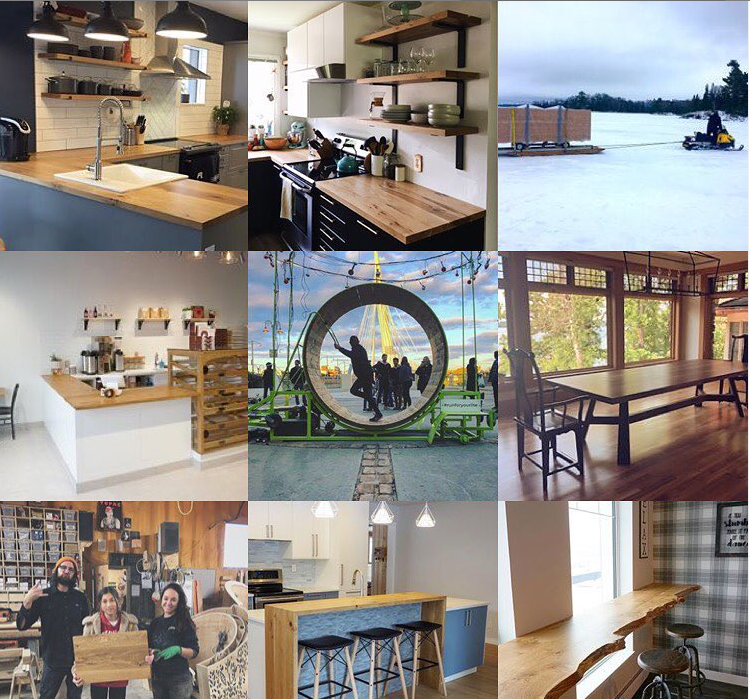 K: With the car co-op, I never felt like we were “without a vehicle”. It sort of gave us enough time to figure out how to bike, bus, and walk around the city, and still have a car for the times we needed. Like visiting your parents in the suburbs or getting groceries, things like that.

– Starting a family is a big change, how did carsharing fit into that transition? What are some of the questions folks around you ask you when you tell them you carshare instead of owning a vehicle?

​​K: Our family members were definitely saying things like, “so your getting a car now, right?” and  “what happens when you go into labour and you don’t have a vehicle?!” Well I’m not driving myself when I’m in labour anyways! We have lots of friends in the area and people always want to drive friends to the hospital. K: We also hear things like, “what would you do if your child was choking?!” Well, what would you do? Do first aid and call an ambulance! People have this idea that we are stranded, but really, I’ve never felt like that.

J: Exactly, there’s just too many other options anyways. There’s just never been a situation, which makes us critically re-frame our decision about not owning our own car.

– So what are some factors that frame your decision? What would you say to someone who is thinking about carsharing as a family? What kind of tips do you have? ​J: Be critical of where you live, yes in relation to the cars but also other types of transportation.  You have to really think about planning your trips and what you’ll use for each one.

K: It’s an opportunity to be outside with your family more! We are walking and biking places together all the time.

J: It can help you slow down. I think that is the biggest thing we noticed during our time with the car co-op. When you have access to a personal vehicle, it’s almost too easy to just keep going and going because you just get up and use it whenever you want. With the Co-op cars, you have to be slow and methodical with what you are doing, where you are going, and why you are going there.

K: Just crunch the numbers and figure out what your vehicle is costing you! People probably think “well its just gas and insurance”. But you forget how much you spend on financing, parking, repairs and maintenance!

J: Plus again, when you always have access to a car you end up using it more than you need, and it costs you more.

K: Exactly, if we were to take out a lease on a vehicle, we know that we are automatically spending at least $xxx.xx every month, and would feel like we need to use the car enough or we are wasting money. With Peg City, if we are tight on cash one month, we just go less places. We have flexibility.

We’re really excited about how we can accommodate families as we grow, and curious to know what are some of the challenges J: Is it a slight inconvenience to carry a car-seat from you home to the car.  That was the hardest thing. If it’s just one of us, we would have to take the car-seat, the stroller and Frye to the car at the same time.

K: When they are younger the strollers have a clip-in feature and turn into a car-seat. But as they get bigger that’s not really as easy.

J: Again its planning, I mean if there was a child seat in the car it would almost be easier …

Did you know that Peg City is starting a child seat pilot program?

​K: That’s so helpful! It sounds great, even if it means just loading up one less car-seat. I CAN DO 1! Two with two kids… well. This would make things much easier.

J: Also, in terms of you average user, I’m sure they aren’t loading up 4 people in the car every time. So it wouldn’t even really get in the way for others.

– Before we let you go, do you have anything else you want to add or talk about?

​J: There are so many other benefits to joining the co-op! One being the Manitoba Community Enterprise Development Tax Credit. Last year we invested some of our tax return in the co-op and the this credit gives you 60% back of whatever you invest that year, no matter what! (It wont be deducted from your return, even if you end up owing the province money) It is a pretty awesome way to invest in Peg City! K: Carsharing is also a way to teach our kids about the idea of sharing in general. We are a part of something with other people, and that a nice lesson to teach them. We don’t share enough in this world.

J: It also helps if Frye is kicking the back of the seat! We just explain that making a mess in our shared car is not acceptable for other people as well.

K: Its also a good reminder for me too, because I would definitely make a mess in my own car…

Are you curious about how carsharing can work for your Family? Send us your questions on Facebook, Instagram, or send us an email at [email protected] You just might see you question featured in the next Q&A feature!